Next Healthy Ride
Dulwich Park Cafe  SE21 7BQ
Oct 1st. 10am - 12 noon
The challenge was to design a non-hilly ride starting from Dulwich.  Ended up following the “lost” river Effra to the Thames.  Starting at 131ft and ending at 16 ft.  With all the small bumps there is a total of 245ft of ascent, mostly on the return leg, of course.  But it is pretty low slope stuff.  Also had not realized you could do a Dulwich to the Thames ride within our 2 hour envelope.  But a total of 11 miles should be just do-able.
Outward route is going to be quick.  Unusually we will use several main roads, notably a long run down Brixton Road.  This is not bad as there is plenty Bus Lane.  Return route, when we will be going slower, is a more typical “Healthy Ride” back street and parks route.  Route at https://goo.gl/p7bpWJ 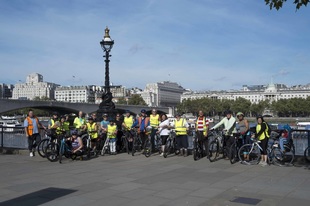 Riders on sunny South Bank (Photo by Peter)
Ride Report: Sept 24th 2016. 10am-12 noon.
South Bank Loop from Peckham
Nice Autumn day, plenty sunshine.  22 riders at start.  The idea was to include the Lambeth Car Free Day on Cornwall Rd near the South Bank. Unfortunately had overlooked that it was only a Car Free Afternoon, starting at 12 noon.  So ride was to view the preparations for the car free day!  Peddle my Wheels, the affordable bike market, were all set up at 11am. The stage was also set up, but not in action.  But disappointingly only a small section of the quietest part of Cornwall Rd was being used.  Route was out using Quietway 1; back partly using NS Cycle Superhighway; map at http://goo.gl/Hp8JQ4 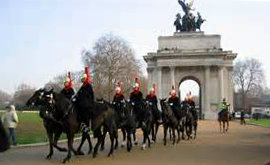 Horse Guards at Wellington Arch
Ride Report,  17 Sept 2016.
Royal Parks Circuit
17 riders (including 2 new faces) on a grey, cool morning - quite autumnal.  Headed west along the river to Tower Hill, then E-W Cycle Superhighway to Blackfriars.  Short northward run on N-S Cycle Superhighway followed by back streets to Tavistock Place.  Used the excellent unidirectional cycle lanes with light segregation in Tavistock and Torrington Place to Gordon Square.  Note these are a "trial" and are now out to Consultation to see if they should become permanent.  So it is important that as many of us as possible support the scheme at http://news.camden.gov.uk/have-your-say-in-the-torrington-place--tavistock-place-route-consultation/.
Delayed slightly at the junction of Tavistock PLace and Gordon St by a bizarre collision.  The group was passing a cargo bike heavily loaded with food.  We pulled off on the left so that the right turn could be organised.  Unfortunately one rider pulled across the cargo bike which struck his rear wheel.  The cargo bike was, as mentioned, heavily loaded and the impact buckled the rear wheel making the bike unrideable.  So off to the nearest bike shop for one rider; an unfortunate premature end to his ride.
From Gordon Street past Euston Station (traffic terrible), across Hampstead Rd and into Regents Park at Chester Rd.  Welcome coffee stop at the cafe on Chester Rd.  Next around part of the Inner Circle and out over York Bridge.  Short east stretch to Park Sq W then via Portland Place, New Cavendish St and Welbeck St to Debenhams on Oxford St.  Our 2 new riders had never ventured into London traffic before so we took them across Oxford St and down New Bond St.  A gentle introduction........
West along Grosvenor St to Hyde Park and the slightly downhill path to Hyde Park Corner.  Busy here with people preparing for the Refugees March later in the day.  Then at the Wellington Arch met the horse guards returning from the Changing of the Guard.  A fine sight - but did rather get in the way.  Next a "tourist" route past all the sights - Buck House, Horse Guards, Houses of Parliament.  That led us to the E-W Cycle Superhighway on the Embankment.  Quick run back with a nice tail wind via Blackfriars Bridge, NS Cycle Superhighway, Quietway 1 from Webber St to Stephenson Crescent and Southwark Park.  28 km, 600-800 calories burned.  Route at https://goo.gl/elGVVY
Ride Report Sept 10th
Tour de Rotherhithe Nouveau
17 riders at the start despite dire weather forecast of heavy rain.  Headed out past Decathlon with 2 new young riders who had joined us doing wheelies past the shoppers.  Across Southwark Park (more wheelies) then to King Stair Gardens where a large encampment was encountered.  Apparently for the finish of a charity walk from Fulham.  Next our usual stop at the Salter Statues.  At this point our young wheelie friends became a bit bored and took themselves off (general sighs of relief from most of the group).  Downstream to Surrey Docks Farm and a 10 minute stop to look in on the Farm's Harvest event.  Were greeted by Margot who had skipped the ride to help at the farm (was about to become a lion....).  Continued along the river to the Deptford riverside, then headed back around South Dock and Greenland Dock.  Another customary stop at the Sustrans Portrait Bench that commemorates Barry Mason, who started the healthy rides way back.  Finally through Russia Woodland to Stave Hill, a loop down to Surrey Water and along the Albion Channel to Canada Water.  During this stretch had to take extra care as there were loads of people walking and running while staring at maps (and not looking where going).  They were orienteering with a clearly well-supported event taking place in and around Russia Woodland.  Back at Canada Water at 5 to 12 - and we only had a few minutes of very light rain! Route at https://goo.gl/PTWPXX.
Ride report, Sept 3rd 2016, Fire of London Anniversary Ride
33 riders on a sunny morning at Canada Water - a new record.  Werner leading a fascinating ride round the perimeter of the fire (or a least as much as we could handle in 2 hours).  Track at http://taffimai.w2.org.uk/healthy-rides/HR-GreatFire-20160903.html.  See full report at http://southwarkcyclists.org.uk/fire-of-london-healthy-ride-another-record-turnout/
Ride Report,  20 Aug 2016.  9.30am - 1pm
"+" Ride: Greenwich to Trinity Buoy Wharf Again
Start/Finish Cutty Sark
Notes from Amanda who led the ride.
We started with 29, one dropped out at Woolwich ferry, another couple at Woolwich tunnel, due to being drenched by the rain.  Walked through the tunnel and the sun came out the other side.  Werner was back marker and we had one puncture just before entering the wharf, so Werner stayed to assist and I led others to the new coffee stop (we were all impressed with this one - stunning and quirky).  We planned to stay 30 mins but ended up 45-50 due to the flat tyre lady needing sustenance too, no problem.
We did not get into the lighthouse because the litigator had not turned up (he should have been there at 11). No-one was bothered though, because the cafe was so nice.  Got back to Cutty Sark dead on 1pm.  All enjoyed it and liked the easy route. 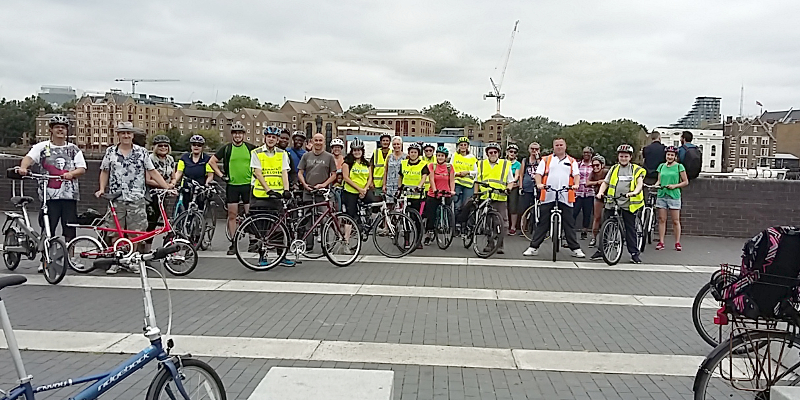 27 riders at Salter Statue site on Rotherhithe riverside
Healthy Ride Report.  August 13th 2016
Cross River Loop via Greenwich and Tower Bridge
One of our favourite rides (no hills!). Downstream to Greenwich and through the foot tunnel to Wapping.  Along the north bank to Tower Bridge, across the bridge, then Thames path route (NR4) back to Canada Water.  A marvellous 27 riders.  David (ride leader) reports: "Weather a little cooler than forecast. Usual mix of regulars but many new faces. We got back on time in spite of  logistical problems of large group spread out like The Tour of France." Photo from Judy who summarised the ride as "Good fun".  Route at  https://goo.gl/DhhUOD
Healthy Ride Report - Aug 6th
12 riders at the Pavilion Cafe in Dulwich Park on a glorious August morning.  Headed off on a challenging route up the slopes to Crystal Palace Park.  A few early issues with non-functional gears were partly fixed.  Stopped briefly at Horniman Museum, then up Sydenham Rise and through to Sydenham Wells Park.  Short ride on saw us enter Crystal Palace Park at the small gate off Crystal Palace Park Rd.  Rode down to the lake then round to admire the dinosaurs.  Next up through the park and along the terraces, eventually arriving at Crystal Palace Parade.  Made good speed down Farquhar Rd, past Kingsdale School and reached Bel Air Park in time for a circuit.  Back at the Pavilion Cafe just a few mins after 12.  Route at https://goo.gl/z4Wft7