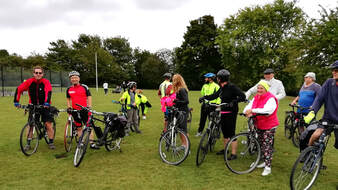 Riders in Telegraph Hill Park
Grey day, but dry.  15 riders set off from Peckham Square and climbed steadily to Telegraph Hill. Then across to Blackheath by which time 3 more riders had joined. Back via Greewich Park, Cycleway 1 and Bridgehouse Meadows.
Full report  with more photos on the Southwark Cyclists web site.  Route at https://goo.gl/itW2R4. GPX filie below. 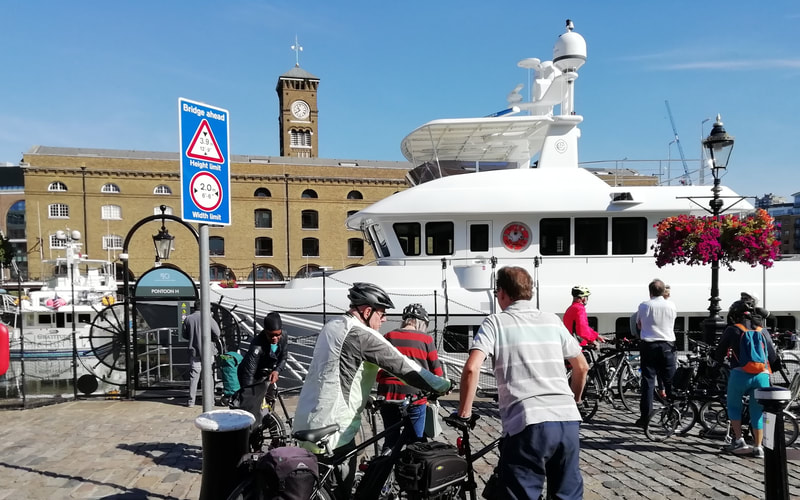 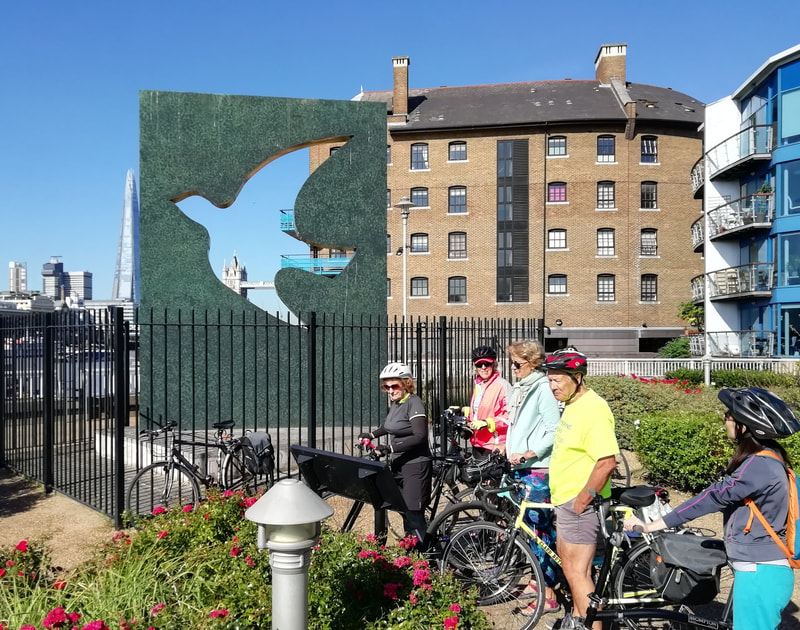 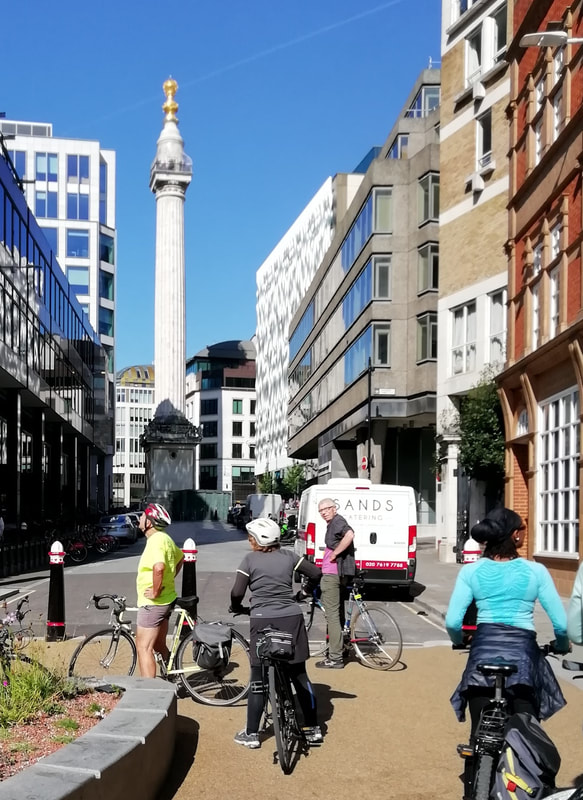 Sept 14th 2019.  Ride Report.  Bermondsey Street Festival. Planning an easy-paced ride to the Bermondsey Street Festival (Festival details on Facebook at http://tiny.cc/vm21bz)
Gorgeous sunny September morning.  Seventeen riders off from Canada Water and down the Albion Channel towards the Thames. Stopped in surprise at the second brdige, or rather at the point where the second bridge used to be.  then remembered - Quietway 14.  This was using the old NR4 route and it had been decided to replace the bridge with one that was wider and that had wider approaches.  So happy to see this work underway.  Reached the river at THe Old Salt Quay pub and turned west along the Thames path to Tower Bridge. Crossed Tower Bridge and used the pedestrian crossings to get to the slip road down to St Katherines Dock. Brief photo stop in St Katherines thenthrough to the Hermitage Riverside Memorial Garden. Second photo stop at the Peace Memorial and on to Ivory Dock. North to Royal Mint St and Cycleway 3.  Royal Mint St has construction going on and the cycleway is blocked. Not a problem as the road is closed, so cyclists can use this. West to Tower Hill and via Cycleway 5 to The Monument looking stunning against the blue sky (yet another photo stop!). Across London Bridge and down Borough High St to Newcomen St (Cycleway 14).  Followed CW14 to Bermondsey St.  About 11.20 so only a 20 min stop. The Bermondsey Street Festival was already pretty busy (Festival details on Facebook at http://tiny.cc/vm21bz).  Much cooking underway (looked so good returned later for lunch). About half the group either stayed or headed dierectly home and 8 of us rode back to Canada Water using the Cycleway 14 route mostly close to the Thames.  Can't really go wrong when you get weather like that!
Route at http://tiny.cc/u311bz 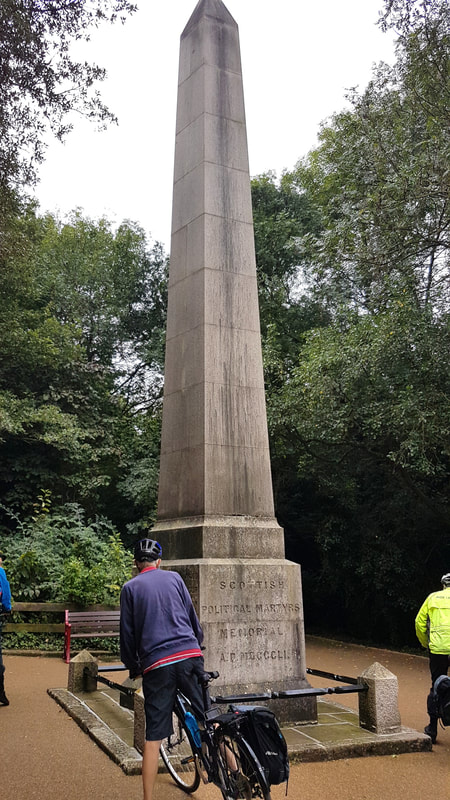 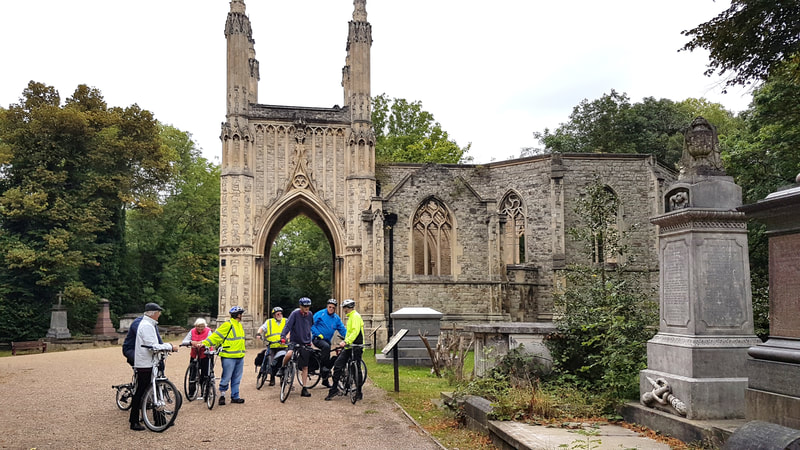 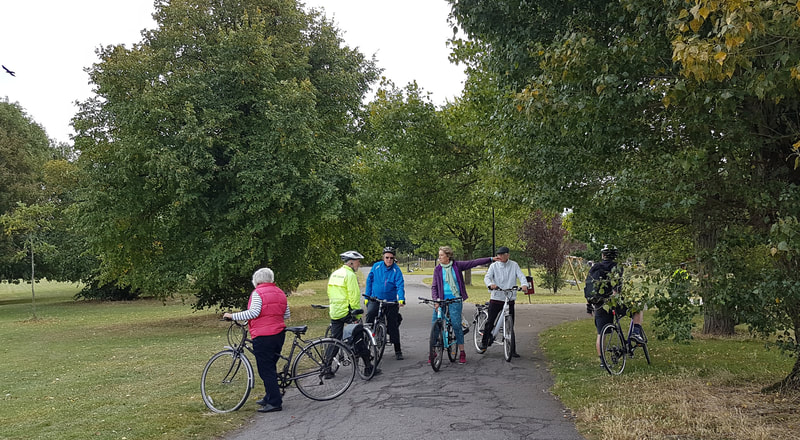 Dulwich Park to Ladywell Fields        Sept 7th 2019
Cemeteries, Parks and Fields
10 riders in Dulwich Park on a dry day ready for this easy-paced ride through 4 cemeteries, 2 parks and 2 “Fields”.  First to Peckham Rye Park, then through Nunhead Cemetery. Stopped at the Scottish Martyrs Memorial and then the ruined Chapel.  Paola found us on the cemetery path and joined the ride. Over the railway to Brockley and Ladywell Cemetery where I became lost again! Eventually found our way to Hilly Fields.  View from the top limited by trees. Need to climb up again in the winter.  From Hilly Fields down to Ladywell Fields and along National Route 21 towards Catford. Always relieved when we make the right turn into the fields safely.  Not good that this exit from a popular park still has no crossing.  Bit before Catford Bridge Station turned homewards on what is now labelled C22 on the Open Street Map. Up and across the railway from Eddystone Road, then through Camberwell New Cemetery and along Brenchley Gardens. Took the off road path through the gardens themselves as we were a smallish group.  Crossed busy Forest Hill Road to Camberwell Old Cemetery, our 4th and last one. Round the contours to Lordship Lane and through estate roads to Dulwich Park getting back in time for a circuit of the park. Cemeteries make excellent cycle routes – nice paved paths and few pedestrians. Thanks to Brenda for the photos. Route at http://tiny.cc/vgfpbz,  GPX file below.

Download File
Burgess Park to Wandsworth Park. "+" Ride  Aug 31st.
Lovely sunny morning in Burgess Park at the Park Life Cafe for the start of this + ride.  Not susprisingly a good turnout of 26 riders.  The plan was to explore a bit further west on the south side of the river, lagely using a route we had ridden in October 2017, see report.
Modified part of the ourward route so this time went via Vauxhall and Battersea Power Station to Battersea Park. Managed to avoid crossing 9 Elms Road by using a lane set aside for constuction traffic and a bit of pavement. Then along the leg of the road circuit of Battersea Park nearest the river.  Most of this is traffic and speed bump free and allows some stretching of the legs. Awkward right turn out of the Park, then on to the nice paths along the Battersea and Wandsworth riverside, eventually reaching Wandsworth Park pretty much on time at 11am. About half the group opted for a relaxed coffee break while the rest nipped along to Putney Bridge and back.
A few riders peeled off early on the return leg but around 23 riders were still present as we headed towards Wandsworth town centre. Some of the route here is marked as Cycle superhighway (CS8) and most is Wandle Trail, but cycling provision is poor or non-existent. At Mapleton Rd crossed into King George’s Park and rode a nice path following the Wandle for about 1km. At the south end of the park, on to quiet(ish) roads to Earlsfield.  Opposte the station a right turn at lights is necessary. This had been a worry as opposing traffic streams share the same phase and there is a lot of turning traffic.  But we were in luck. A driver from the opposite direction stopped to allow us to turn right safely. You should have heard the cacophony of horns as drivers held up behind let rip!
Climbed the low hill to Wandsworth Common and then headed to Clapham Common.  These Commons were quite busy with people enjoying the late summer sunshine.  From Clapham Common took a bit of Quietway 5 then negotiated the right turn at Clapham North Sation.  This is anther tricky junction, but we were lucky again.  A bus pulling out a short way back completely blocked northbound traffic allowing us to cross to the right turn lane without difficulty. Steady, long, back streets run puncuated briefly by Myatts Fields Park saw us back into Burgess Park about 12.50.  On a route with several light-controlled junctions and a large group, I was very grateful for David's diligent assistance at the rear. Overall this is an interesting route with great contrasts.  Some poor road stretches with difficult junctions bridging the gaps between some really nice shared paths.  Route map at https://goo.gl/94U3Ve and gpx file below. 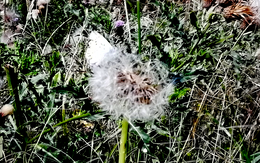 Small, pale blue, butterfly in Myatts Field
Butterfly Ride  Aug 24th, 10-12.
July butterfly ride was washed out, but undeterred we tried again. What a contrast in the weather!  A month ago pouring down with cold rain.  But now, blazing sunshine at the start of a record-breaking Bank Holiday.  Wall to wall sunshime and 33 degree temperatures.
So did it bring the butterflies out?  Well, not really.  Reasonable numbers of whites, but only one brown and one blue.  It is late in the season for buttterflies and sources of nectar are fewer that in July or early August.  We checked out Peckham Rye Park, then the playing field area off the the Greenway.  Ruskin Park nature area was nice, but only modest numbers of white butterflies, same at Elam Street Open Space. Myatts Field nature area had white flyers and one small blue butterfly (managed to photo this with phone, but not very clear as phone focussed on and set exposure for background vegetation - must bring better camera another time). Continued to Kennington Park and visited Bee Urban. This is a local enterprise keeping bees, but also doing craft classes and holding Saturday bicycle workshops at Camberwell Subterranea (see http://beeurban.org.uk/the-bee-barn/ for more information).  Skipped Walworth Garden Farm as time was running out and cycled straight to Burgess Park where there were again a few whte butterflies.  Back at Peckham Square pretty much on time after an enjoyable ride in fine weather for the 17 riders who took part.  Route at http://goo.gl/v14knG  and .gpx below. 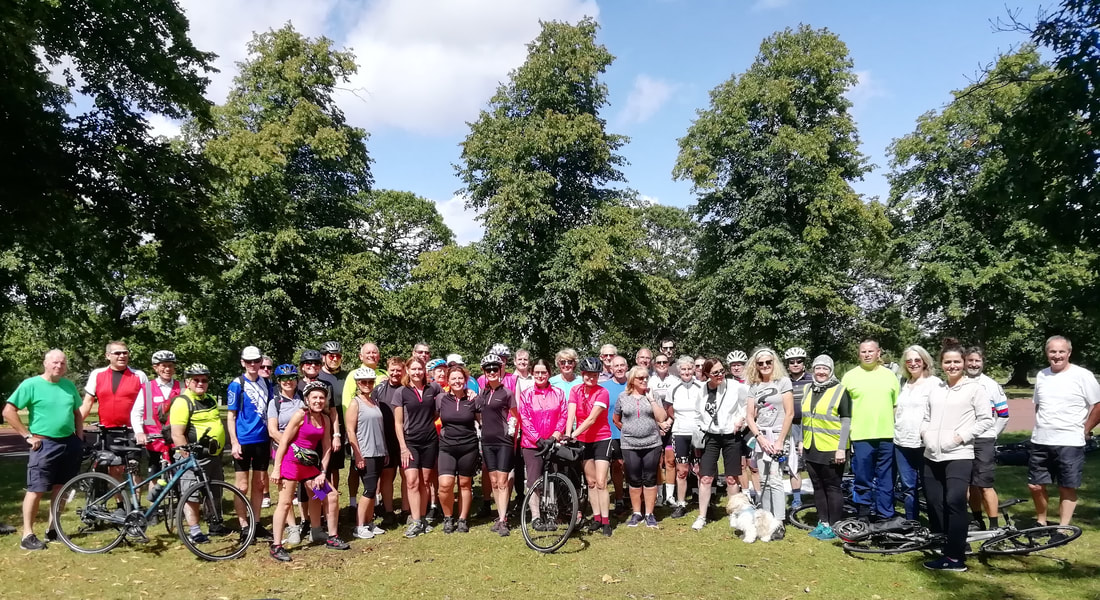 Our big social event of the year!
Collected 23 riders from 3 start points (Dulwich, Peckham and Canada Water). At Greenwich met up with 35 healthy riders from Bexley and 4 from Newham. Great weather and lots of people joining in slow races and musical bikes.
Full report at https://southwarkcyclists.org.uk/healthy-rides-picnic-2019/
Route at http://tiny.cc/683raz

Aug 10th 2019. Oldest house in the City
Harry returned to lead his ride to 41 Cloth Fair.  Here is his report
With Met Office weather warnings for strong winds 9 riders gather at Deal porters square for our 2 hour ride to the City of London to find the oldest House.  After the briefing and we were off along Albion channel making our way to the Thames path. Crossed over Tower bridge and took the East/West Cycleway to St Dunstan in the East.  This is a very old church that was bombed in the blitz and is now a public garden.  Continued via Q11 to the Guildhall where they was setting up for an event. Next across to the Barbican, along Beech street tunnel towards Smithfield and on to 41 Cloth Fair, the location of the oldest house in the city.  This has been continuously occupied since 1597.  It is located across from St Bartholomew the Great a church dated circa 1123. We then made our way along Cycleway 6 and over Blackfriars Bridge, picking up Q1 and heading for Southwark park. On the return leg we did see some large tree branches which had fallen into the road. A very good fun ride with a great bunch, we completed 11.5 miles in total.  Many thanks to Mike for back marking.
And of course many thanks to Harry for leading.  Pity about the weather.  Notes about oldest house below. Track at www.mapmyride.com/workout/2252218598