Fri Sept 16th.
Sustrans are planning to have people gather at the bench at Greenland Dock from about 10:30 to welcome the 'Pedal On UK' riders about at 10:45 for the unveiling.  Pedal on is a national ride by a group of cyclists visiting all the Connect2 sites.  Friday morning is Southwark’s turn.
The bench commemorates the work of Barry Mason.  Barry worked for many years to promote cycling and improve facilities for cycling.  He was co-ordinator of Southwark Cyclists and started the “Healthy Rides”.  Barry died suddenly in 2011.

Southwark Cyclists Ride to unveiling of Portrait Bench at Greenland Dock Fri, 16/08/2013 - 9:15am
For latest information check SC Web site
Start location t West (Camberwell Rd) end of Burgess Park.
Join us for the unveiling of the new Connect2 portrait bench honouring Michael Caine, Phyllis Pearsall and our much loved and missed Barry Mason, coinciding with the Pedal On UK ride.
Our feeder ride will travel from Burgess Park to arrive by 10am latest.  We will use as closely as possible the new Connect 2 route (see below).
Bench location:
Brunswick Quay, Greenland Dock, Surrey Quays (opposite The Moby Dick), SE16 7PT
Attractions at the Dock will include:
More here: http://www.sustrans.org.uk/events/pedal-uk-south-bermondsey

Route is shown at http://goo.gl/maps/LTMx3. plus a detour to the bridge. Ignore the northern bits.  Signing is good with blue signs and NCN route number in red, 425.

Rally in 2007 to get people to vote for Connect 2 in the national poll. Photo from Roger Stocker
Bridge pictures from 2007
More old pictures retrieved by Werner.  Amongst those shown is the late Barry Mason.  How pleased he would be to see the new bridge in use.
Bridge now open.  Peter John, Leader of Southwark council cut the tape Friday April 19th.  The pictures above show the new bridge and the old bridge, ca 2006/7.  Southwark Council had laid on chocolate biscuits and pastries. And Ann Warren had thoughtfully turned up with two bottles of bubbly to add some sparkle to the event!
About 30 people were there. Five of us from Southwark Cyclists and Jane Davis from Lewisham cyclists. People from Sustrans, Conways (the main contractors) and Peter Brett (the design engineers). Good to see Tom Sharland who was the main Sustrans person involved until last year when he left for a local government cycling job in West London. Lots of Southwark Council personnel present including Cllr Barrie Hargrove and of course Franklin Uwakaneme, the project officer for Connect 2, looking very happy.
Work on the pedestrian steps on the west side of the bridge was going on throughout the opening ceremony. Looks as though these will be in use within days.
Now the challenge is to develop cycle routes from the bridge as described in my South Bermondsey routes document. The most urgent is to get a route east past the Millwall stadium and linking to the excellent cycle paths along the railway and across Deptford. There is already activity related to this and Alistair Hanton and I will be meeting Sustrans in early May to work out the best way for us to contribute to the lobbying for an east-going path.
Current Programme
Connect 2 is a Sustrans programme to develop new cycling/pedestrian routes that link up neighbourhoods.  It gained National Lottery funding.  One of the projects in the programme was to create a route from Burgess Park to the Rotherhithe riverside utilising a disused railway bridge near South Bermondsey station.
Southwark Cyclists played a key role in lobbying for funding for this project.  In particular the late Barry Mason, who will be commemorated by a portrait bench on the route (probably at Greenland Dock).  The project is being managed by Southwark Council.  Report of Steering Group, Dec 2012.
More information about the project can be found in the Southwark Council Connect 2 Newsletter of Sept 2012 (link below)

Removal of the old bridge; installation of the new one

The old bridge was removed on September 29th 2012.  See photos here.
The new bridge was installed on Saturday Nov 24, 2012 and the bridge should be open for traffic in early 2013. More photos here. 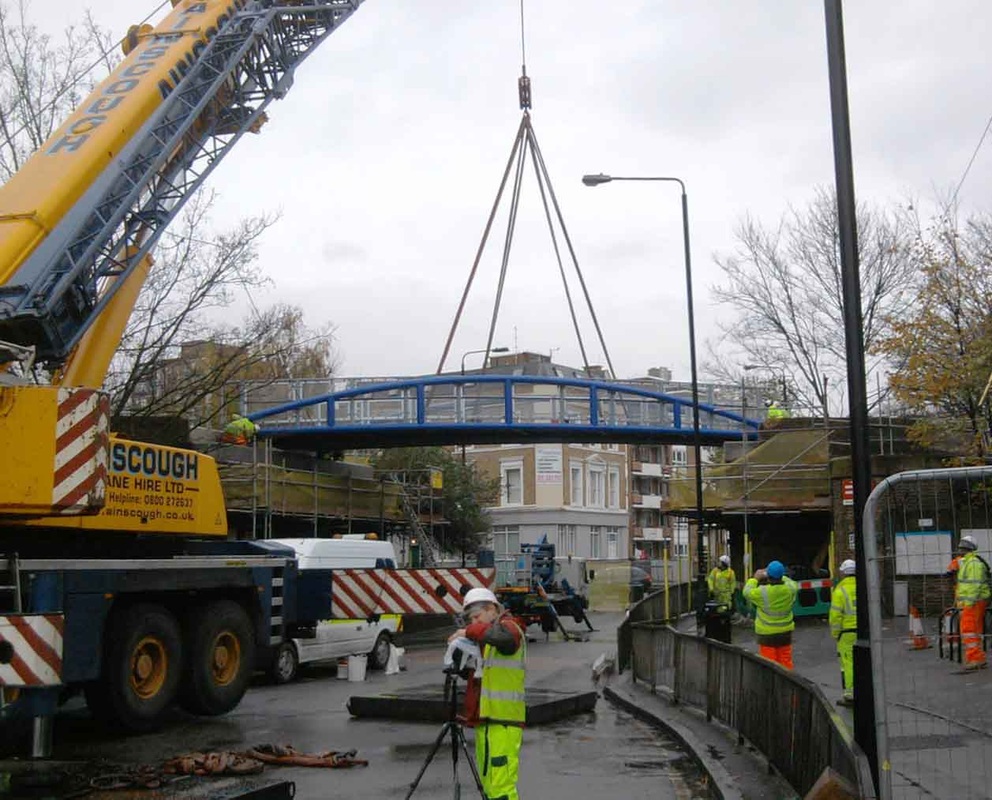