Extra Christmas Healthy Ride, Dec 28th - Report
Last minute e-mail on Dec 27th produced 5 riders at Canada Water on one of the nicest December days that I can remember.  Three were from the summer's Grange Get Cycling project, the other 2 were my co-leaders, David and Werner.  Did the scenic circuit along the river to Greenwich, up through Greenwich Park and back through Deptford and Southwark Park.  Found the path from Surrey Canal Road to Oldfield Grove blocked off at the railway arches.  Not clear why or how long this blockage will last.  Next ride Jan11th - hope we get the same great weather!
Healthy Ride Report, Dec 14th 2013
Just 4 of us at Canada Water on a mild sunny morning  - maybe everyone was Christmas shopping!  Overground train to Sydenham, then to Waterlink Way (NR21) eventually to Deptford Creek.  Final route along river (NR4), round South and Greenland Docks and back to Canada Water. Longish run (9 miles) for 1.5 hours, but were only 5 min late getting back.  Route at http://goo.gl/maps/oU8rI 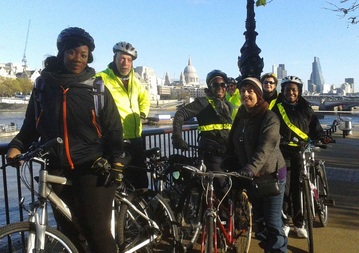 Healthy riders on the South Bank
Healthy Ride Report, Nov 23rd 2013
8 riders at the Peckham start with Bruce leading and David covering the rear.  Gorgeous sunny autumn morning for a ride to the South Bank and back.  Route out down Canal Path, round Burgess Park, along the greenways route to New Kent Road.  Across NKR, Bath Terrace, Gt Suffolk St, Union St and Hatfields.  In plenty of time to visit the small “roadshow” about the proposed Garden Bridge (https://consultations.tfl.gov.uk/rivercrossings/garden-bridge).  3 Tfl staff in an empty room, so we could ask lots of questions (NB not surprising no-one was there as there was no signage directing people to the Coin St Centre).  No plans for cycling across the proposed bridge – problems with space for on/off ramps.  Pointed out that a steep ramp would be OK as long we could cycle across the bridge.  TfL still not taken on board that at peak time there are more cyclists on central London bridges than all other traffic, so contemplating a new bridge without cycling is ridiculous.  Return route parallel to the river (NR4) to Dockhead, then route via Bermondsey Spa Park, Glengall Rd and the Canal Path.  Back spot on 12 noon!  Today’s route at https://goo.gl/JQhlfL
Next ride Dec 14th, Canada Water start/finish.  Also planning to keep rides running on 2nd and 4th Saturdays through early 2014.
Healthy Ride Report, 9 Nov 2013
Leader Werner. Six riders at the dry start, including 2 new riders, father with rather young daughter. Headed along the river westwards. By Hays Galleria rain had set in and father and daughter ere getting a bit chilled so headed back along the route we had come. Remaining riders continued and were rewarded with view of QRB Gloriana, which the Lord Mayor had parked near HMS President, while waving at wet subjects from the comfort of his coach.  Continued on the planned loop back to Rotherhithe, getting rather damp! 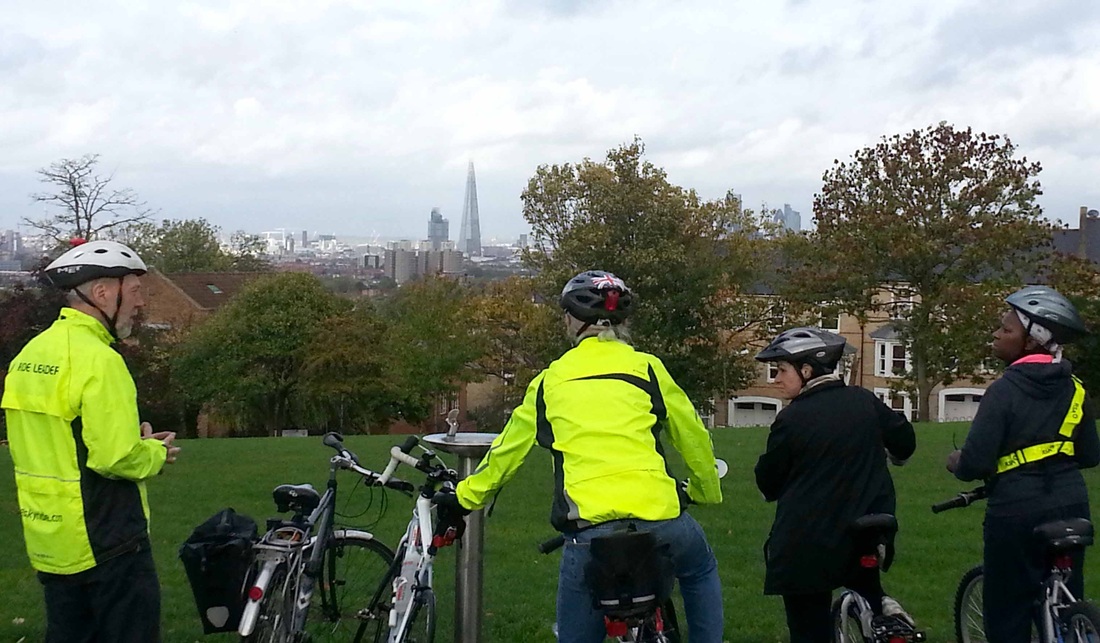 Looking across London from Telegraph Hill
7 riders at Peckham Square for the 10am start, plus Bruce leading.  Up to Dulwich Park, then more uphill to Camberwell Old Cemetery.  Undulating to Nunhead Cemetery where a delayed rider caught us up, so we were 9 from there on.  Back to Peckham via Telegraph Hill (breezy but great views across central London) and Kirkwood Nature Reserve.  This is an attractive small strip of woodland near Cossall Park with paths, seats and a pond.
Route at - https://www.goskyride.com/SCG/ViewRouteBlank?routeID=18813
Healthy Ride Report Oct 12th 2013
10 riders gathered at Canada Water on a fine morning.  Along the river to Greenwich and into the park, looking beautiful in the sunshine with the autumn colours developing in the trees.  Then up the hill to Blackheath and across to Deptford via the bridge at Elverson Rd DLR station and Brookmill Park.  After the Deptford paths crossed Trundleys road at Folkstone Gardens.  Needed to wait for ages for a gap in fast traffic.  A crossing really is needed there, as Lewisham Cyclists and ourselves have repeatedly pointed out.  Finally down through Southwark Park and back to Canada Water.  10 miles in 2 hours.  Route at http://goo.gl/maps/4cK9b

Healthy Ride, 14th Sept 2013
Start/Finish Canada Water Library
On a wet, grey, morning, 11 riders, including 9 new riders who had seen the ride on the GoSkyride web site, plus Werner leading.  Of the new riders, 4 were children accompanied by parents. 14km circuit across Southwark Park, round to the Connect 2 Bridge, big loop through Deptford to the river, back past Greenland Dock and Stave Hill.  Route at http://taffimai.w2.org.uk/healthy-rides/Rotherhithe-20130914.html.