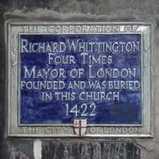 Panto time - ride included homage to Dick Whittngton (and cat?).
Boxing Day Ride 2016 - Rotherhithe tunnel and the City
13 riders on a pretty nice day, led by Werner on a brief Boxing day tour.  Full report at http://southwarkcyclists.org.uk/boxing-day-healthy-ride-report/
Healthy Ride +              17th Dec 2016.
London Fields, Victoria Park, Regents Canal
9.30am on a misty, mild, December morning found about 10 of us at Canada Water.  Headed in groups to the station to catch the Overground to Haggerston.  10am at Haggerston we had about the same number of additional riders, so a group of 18 set off to London Fields.  From London Fields walked through busy  Broadway Market, breathing in many delicious aromas.  Next along Regents Canal towpath to Victoria Park and a complete circuit of park.  After a leisurely stop at the Pavilion Cafe headed back to the towpath, diverted into Mile End Park and crossed the Green Bridge, then continued on the towpath to Limehouse Basin.  Finally west on north bank Thames route to St Katherines, along the EW CSH from Tower Hill, over London Bridge, and east on south bank Thames path (NR4).
Train link went well, lots of trains and plenty of room for bikes.  Although accidentally hitting the alarm button in the Haggerston Station lift did delay 3 riders!  Route at  https://goo.gl/7Mf3Na
Canada Water to Blackheath and back
Dec 10th, Canada Water, 10-12.
Light rain/drizzle did not deter 13 riders keen to escape the rigours of Christmas shopping.  Headed out via Southwark Park on a near repeat of last year’s December ride to Blackheath and Greenwich Park.   Included a section on Q1 past the 2 new cafes featured in my recent blog (http://healthyrider.weebly.com/bruces-blog).  Crol and Co was busy, Festa sul Prato less so.  Some murmering in the ranks about not having time to stop for coffee.  Next the Deptford paths, Brookmill Park and the steep Morden Hill on to Blackheath.  Across Blackheath to Greenwich Park, then down the hill and home along the Thames path (Nat Route 4).  Route at https://goo.gl/NeIuSd 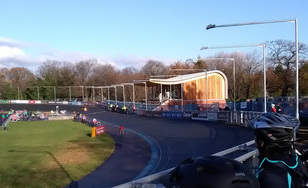 Five Parks and a Velodrome
﻿﻿﻿Dec 3rd  10am - 12 noon
Peckham Square start with 19 riders on a dry, still, December morning. Headed up to Peckham Rye Park, then on to Dulwich Park and Herne Hill Velodrome.  Velodrome busy with youngsters on the track and on the mountain bike trail.  First sight of the new pavilion (see photo) looking very smart in the winter sunshine.  Not quite finished yet, but by early 2017 will have a nice cafe (as well as changing facilities etc).  Why not take a pavilion tour here!
Park number 3 was Brockwell where we had time to ride up the hill and down again.  Walked through busy Herne Hill station forecourt where the Saturday market was in full swing.  Park number 4, Ruskin Park, came next and finally Burgess Park. Had time to stop and watch the BMX riders - again lots of small cyclists having fun.
This is an excellent route (though I say it myself...) and with the trees in late autumn garb the parks looked great. Route can be seen on Google maps at http://goo.gl/maps/hFFNL
Peckham to Ladywell Fields - ﻿﻿﻿Nov 26th 2016
17 riders on another sunny November morning.  Rode to Ladywell Fields via LCN 22 (Peckham Rye Park, Brockley Way, Ewhurst Rd). Then north on National Route 21 to the curly bridge where most riders tried the steep circular ascent. Brief stop at the cafe in Ladywell Fields then back via Ladywell Rd, Crofton Park, and Peckham Rye Park again (different paths). Thanks to Amanda for leading.

Emirates Airline and Olympic Park   Healthy Ride +  Nov 19th 2016
14 riders on cold, sunny, November morning at Cutty Sark.  Report and pictures at http://southwarkcyclists.org.uk/by-air-and-under-ground-a-non-typical-healthy-ride/
Lord Mayor's Show Ride.  Nov 12th 2016.
Report from Werner who was Ride Leader.
The forecast predicted serious rain and so no surprise that there was only a backmarker when I arrived at the library and nobody to fill the space between him and the leader. Then a first-time rider turned up and we had a quorum.
Having somebody new also meant that we could introduce him to Q1 and
he liked his first experience.
Southwark Bridge was open but quiet, no blocks at the other end and
nobody objected when we rode through the Cannon St - Queen Victoria St
junction. QVS, like last year, was wonderfully free of cars and we weren't even stopped when we pioneered an unofficial contraflow at  Blackfriars.  QVS had been so much fun riding down that we went up again and got close enough to Mansion House to get a good look at the waiting horsemen in their shiny uniforms and see the a bit of the front of the procession.
On the way back we appropriately stopped at St Michael Paternoster Royal to read the blue plaque for Dick Whittington, four times Mayor of London. Yes, he really existed but no mention of his cat.
After scaring everybody off before the start the weather improved and we hardly noticed the rain.
Track ridden: http://taffimai.w2.org.uk/healthy-rides/HR-CW-LM-20161112.html
Gunpowder Plot Ride    Nov 5th. 10am - 12 noon
22 riders at Burgess Park Cafe on a bright, cold, November morning. Out via Walworth Green Way, Quietway 1 and Westminster Bridge.  The cycle path next to Big Ben was closed, presumably due to the Million Mask March planned for later in the day. Short stop to consider the merits, or lack of them, of blowing up Parliament. Then on to the E-W Cycle Superhighway to Blackfriars and up to St Pauls Churchyard where 4 plotters were executed.  Skipped the diversion to the Guildhall as getting short of time and headed straight to The Tower where most plotters were held (and tortured...).  Back over London Bridge where plotters severed heads were (probably) displayed.  Return route via Guys Hospital, Trinity Square and Rodney Place.  The considerable number of riders kept together well, in large part thanks to David's sterling work keeping the tail moving.
Route at ﻿https://goo.gl/2iMYNE
Three parks and a Cemetery    October 29  10:00 am-12:00 pm
21 riders started in Burgess Park at the Park Life Cafe on a really mild day. Several new faces and quite a few familiar ones.  First to Peckham Rye Park, then up to Nunhead Cemetery, down to Southwark Park, back to Burgess Park.  All the parks looking autumnal, trees now browns, yellows and reds, most still with plenty leaves.  Despite the large group, made good time, back at the Park Life Cafe for 11:50.  Route at https://goo.gl/EhXqv9 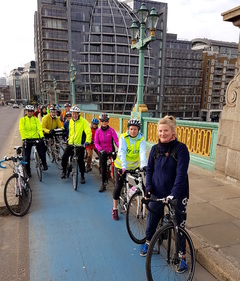 On Southwark bridge heading out
Look Mum No Hands, Old Street
Oct 22nd 2016  10am - 12 noon﻿﻿﻿
Report from Philippa who led the ride.  19 of us set off from Peckham on an overcast morning heading down the canal path to Burgess Park, round the lake, then weaving through the back roads to join Q1 on Trinity Street. Then joined CS7 to cross Southwark Bridge and through the city to the cycle cafe Look Mum No Hands. Coffee and snacks all round. As usual, extracting people from the cafe took time! For the return the sun had broken through making perfect riding weather. We made our way back with a couple of tweaks to the out route ending back at Peckham Square around 12.20. Route at goo.gl/OpBXma   Previous ride reports here (23 April) and here (27 Feb) 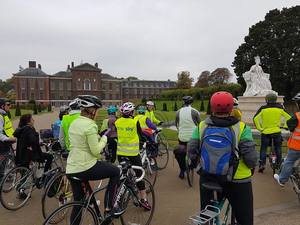 Kensington Palace
Waterloo to Kensington Palace 15 Oct 2016.
17 riders at Emma Cons Garden (Waterloo) for the 9.30 start in rather pleasant, sunny weather.  Two more riders joined later, so a total of 19 on the ride.  A lot of traffic on the stretch from Waterloo to Buckingham Palace, especially close to Victoria with a lot of coaches parked.  Once into Green Park matters improved and we cruised nicely through Hyde Park and Kensington Gardens.  Turned at Bayswater Road and headed back by a good route from Albert Memorial to the Embankment.  Then a short stretch of busy road to Battersea Park where everyone could relax again.  Longish stop at the Cafe.  Used to be the Gondola, now new management and called the Pear Tree.  Much slower service and no Italian pastries.
Continued by an inland route through Lambeth and Vauxhall.  Stopped at the memorial to the the Tradescants, father and son, gardeners to Charles the 1st and 2nd, outside St Stephens Church, Bolney St.  Jane explained their important place in gardening history.  They are buried in an impressive tomb at the Garden Museum (which Jane told us soon (early 2017) to be re-opened with improved cafe).  Next point of interest was Damian Hirst's Newport Street Gallery, recent recipient of the 2016 Stirling Prize for architecture.  Back at Emma cons Garden just before 1pm.
Route at http://gb.mapometer.com/cycling/route_4421033.html 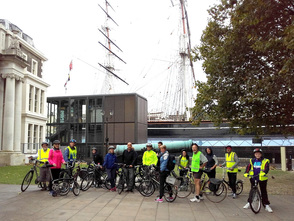 Healthy Ride Report
Oct 8th. 10am - 12 noon
15 riders at Canada Water with David leading.  Headed East to Greenwich, then back using mostly Quietway 1.  Made it as far as Willow Walk (Alaska Building), with return from there to Canada Water.  Stayed mostly dry with a little drizzle here and there, even got back a little early, route was about 10.5 miles.
Healthy Ride Report
Oct 1st 2016
Just 8 riders at Dulwich Park Cafe at 10am.  Not a big surprise as rain was forecast and about 9.30 the skies had opened and there was a heavy shower.  Fortunately the rain had pretty much finished by 10 and we had a nearly dry start and a sort-of dry ride.  Route followed the the “lost” river Effra to the Thames.  We made pretty good time on the outward leg.  That is apart from Brockwell Park where a large charity run was using our planned path, plus most of the other paths in the park.  We had to divert via an up-and-down route to avoid the largest groups of runners.  However, worst part of the route overall was Brixton town centre where at about 10.30 the traffic, including many buses, was already heavy.  Down Brixton Road and round the Oval was gently downhill and quick.
Arriving on Vauxhall Bridge we admired the good flow coming from the Effra, clearly benefiting from the recent rain.  At this point Philippa discovered a slow puncture.  We put the spare inner tube in, but this proved to be a dud.  Note for the future - always check spare inner tube before putting it in - may have been mouldering in a bag for years.  Another rider was fortunately carrying a suitable spare tube and we eventually had the bike sorted.
Return ride was uneventful although we cut out Kennington Park due to lack of time and instead rode straight up Camberwell New Road to Vassar Rd.  Back about 5 past 12.  So you can do a Dulwich to the Thames ride within our 2 hour envelope.  And there really were no significant hills on a Dulwich ride.  Starting at 131ft and ending at 16 ft.  With all the small bumps there is a total of 245ft of ascent, mostly on the return leg, of course.  All pretty low slope stuff.  Planned route at https://goo.gl/p7bpWJ