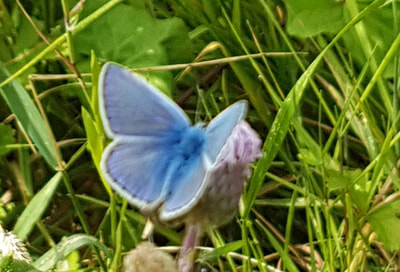 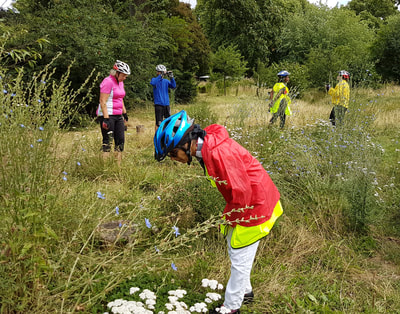 July 22nd 2017. Butterfly Ride from Peckham Square
Our annual ride to celebrate the BIg Butterfly Count.  18 riders at Peckham Square on a showery, cool, July morning.  What chance of seeing any butterflies?
First stop at Peckham Rye Park drew a blank, so across to Ruskin Park via the Greenway.  By the time we reached the nature area in Ruskin Park. the sun was out and so were a few butterflies, including the Common Blue in Jaquie's photo.  Encouraged we continued to Elam Street Open Space where a few white butterflies were flying around.  Myatts Field, our next stop, was the best.  Reasonably warm by now and we saw Common Blues, Large Whites, a Speckled Wood and a Red Admiral. Headed back via Kennington Park, Walworth Garden Farm and Burgess Park, but did not stop at any of these as time was running out.  Just before finishing we were caught in a heavy shower, not a nice way to end.  However, despite the mixed weather we did find a range of butterflies.  Anyone inspired to do a 15 minute count and submit it can find information about the Big Butterfly Count at http://www.bigbutterflycount.org/. Route at http://goo.gl/v14knG
July 8th, 2017.   Hilly Fields Loop
Canada Water start in more glorious weather. 14 riders. Headed for Southwark Park, then over the rail foot bridge at Oldfield Grove to Deptford Park.  Next, Folkestone Gardens, the nice Deptford paths (LCN20), Fordham Park and to New Cross.  At New Cross used the shared use pavements, then  Shardloes Rd and quiet back streets to Hilly Fields.  Nearly everyone managed to ride the steep path to the top of the fields and were rewarded by decent views of central London over the tree tops. Short break then down the very steep path to Vicars Hill and more back streets to Pine Tree Way where we picked up the path along the Ravensbourne River (Nat Route 21).  This took us past the new Leisure Centre in Lewisham, then through Brookmill Park to Creekside where we joined Quietway 1. Followed Q1 westward to Deptford High St.
Major road works going on at the north end of Deptford High St - are we getting some improvements for cyclists?  Alas, very little. The carriageway will be narrower, slowing 2-way motor traffic. No assigned space for Q1 on the short stretch between Crossfield St and Hamilton St.   £3 million being spent on largely cosmetic changes.  Why through traffic at all?  Why no changes to the dreadful junction with Evelyn St so that pedestrians and cyclists can get to the riverside safely?  Hang on, this is a ride report, so better get off my soap box.
Made a small detour to look at the recently redeveloped  Deptford Market Yard next to the station.  This is really smart and provides easy access to the station that also now has modern, cycle-sized, lifts.  Continued from Deptford along Q1 to Blackhorse Rd, then waited at the very busy A200 (Evelyn St).  No crossing anywhere on this stretch of road, but observant motorists spotted our plight and stopped to let us cross. Next along the via new Linear Canal Path, across to South Dock and back to Canada Water.  About 10 miles of easy riding (apart from the bit up to Hilly fields...). Route at https://goo.gl/Ak8XmX or gpx file below. 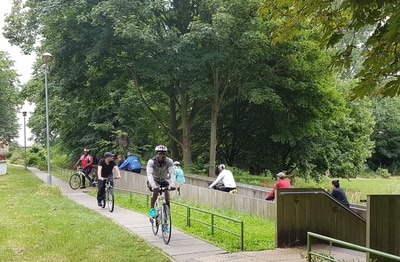 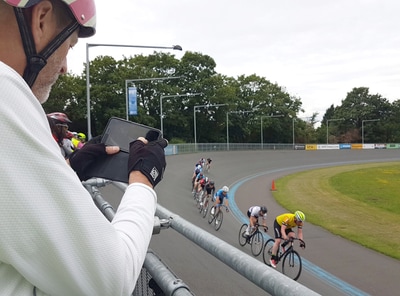 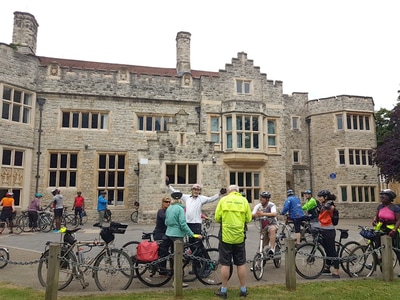 Exploring Dulwich    1st July 2017
Dry warm morning in Dulwich Park with 23 cyclists ready for a gentle ride exploring this southern part of the borough.  Well, most of the ride was gentle.  The first stretch up Overhill Rd is a bit on the steep side.  Impressively, pretty much everyone cycled it.  Views from Dawsons Hill were good with a wide panorama of central and west London.  Next a quiet streets section ending at Greendale and through to the Dulwich Hamlets football ground.  This club was founded in 1893 and was successful in FA amateur contests in the 30s and 50s.  Now a semi-pro outfit in the Isthmian League.  On up to the Dog Kennel Hill Open Space - actually a small piece of woodland - and along some narrow paths, then quiet roads back to Greendale.  Continued to Dulwich Village and straight on past the Dulwich Picture Gallery and Dulwich College to the Toll Gate. Here Amanda's bike punctured, but we were not much delayed as Ricky did a rapid repair. The toll gate is on College Road which is owned by the Dulwich Estates who charge cars a small fee, although motorcycles and pedal cycles go free.  This is the last toll road in London. From College Rd across to Kingsdown House.  Built in 1871, its most famous resident was John Johnston, the inventor of Bovril.  Johnston added the castellations leading the locals to rename the building Bovril Castle.  It was taken over the LCC in 1956 and is now owned by Southwark Council who use it as Library amongst other things.  Final leg of the ride was to Herne Hill Velodrome via Bel Air Park.  The velodrome as busy - cyclists on the main track, lots of youngsters on the mountain bike trail and 2 good-sized groups of small children riding bikes around the track in the central area.  Back on time having completed the whole planned route with a nice large group.  With 23 riders this was the best turnout ever for a Dulwich ride.  Route map at https://goo.gl/CJRHNu
or see gpx file below.  Thanks to Philippa for the photos. 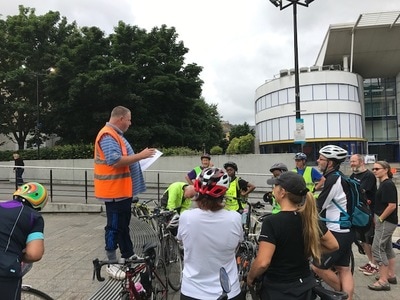 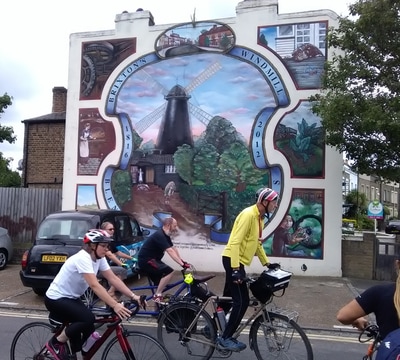 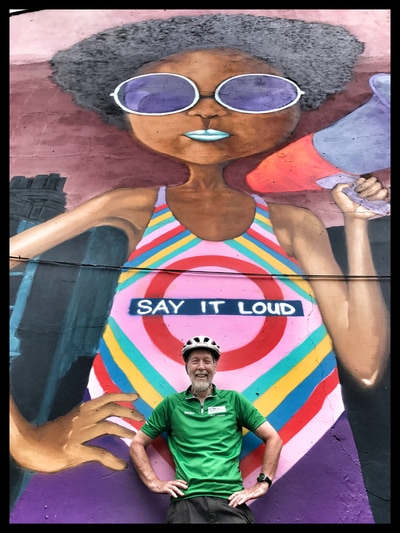 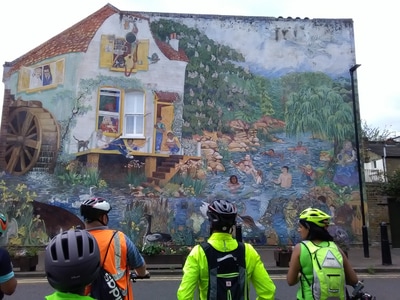 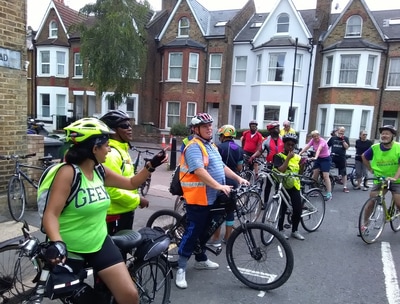 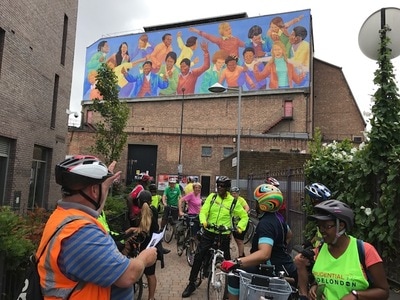 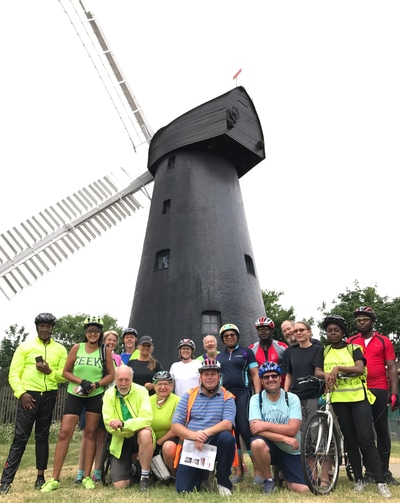 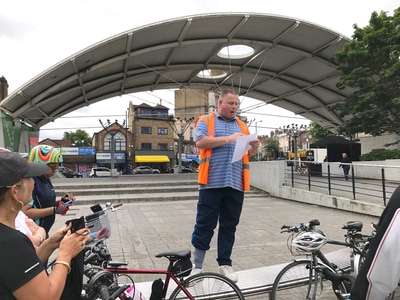 Seven Murals and a Windmill.   June 24th.
20 riders including a tandem (a first for the Healthy Rides), Harry leading, set off from Peckham Square on an overcast morning with the sun attempting to come out at times.  Off down the Canal Path, then through Burgess Park. On to Myatt’s field, through to Elam St Open Space and across Loughborough Junction to Somerleyton road where we reached the 1st Mural named “Nuclear dawn”.  Next safely around the Effra 1-way system to Brixton Hill and cutting thought to the Brixton Windmill.  Second  mural on the wall there, then off to the 3rd Mural of the windmill itself on the corner of Lyham road.  Next rode round to Strathleven road where to our surprise there was an extra mural (“Say it loud”, clearly derived from the James Brown 1968 song “Say it loud, I’m black and I’m proud” that became a Black Power anthem).  At the end of Strathleven Rd viewed the 4th Mural “Big splash”, my favourite!  A marvellously detailed re-imagining of the River Effra. Next we headed off across Acre lane and made our way to Ferndale road and on to Bellefields road where we viewed the 5th/6th Murals.  After this we cut across to Stockwell park and to the rear of the Brixton O2 where we found the 7th Mural “Children at play”.  After 8 murals, time to head back via Loughborough Rd, Burgess Park and the canal path. We reached Peckham Square at 12.09 after a dry and enjoyable ride. Many thanks to Simon for being back marker.  Overall ride distance 10.9 miles.
If you did not make it on the day, try the route yourself using Harry's great guide (download pdf file below). Route at http://tinyurl.com/y7a7hndz  or download gpx file below.  Or see info in the routes section of this site
Cutty Sark to Thamesmead Tor "+" Ride
June 17th, 9.30am - 1pm

Panorama from Tor. Photo from Ross. 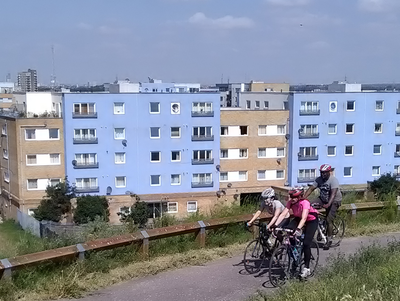 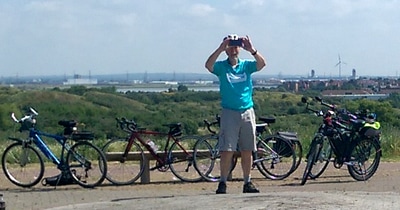 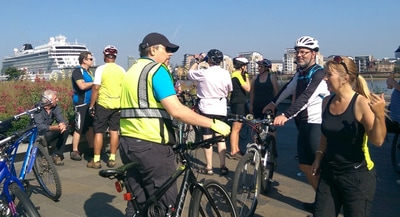 A record 35 riders gathered at the Cutty Sark for this ride.  Greenwich foot tunnel lifts were not working so quick decision to stay on the south bank.  Amanda led us off along the Thames path in glorious sunshine. Only a short detour now around the Bellways development before re-joining the Thames path at Enderby Wharf (see https://groups.google.com/forum/?hl=en-GB#!searchin/southwarkcyclists/greenwich%7Csort:relevance/southwarkcyclists/gk98t4u9ZTw/s9N0irhxBwAJ for details). Made good progress past the O2, then the Thames Barrier. In Woolwich continued on the excellent Thames path past the Arsenal site before turning inland at Gallions Park and following the path to the Tor.  Ascent of the Tor is remarkably easy - a nicely graded, well-surfaced path spiralling up to the summit.  Took a break and a photo op on the top, then back down the spiral path and across on the new-ish path on the edge of the Gallions Reach Park.  This path has 2 very narrow squeezes with high fences which caused many minutes delay.  Why do council's build this sort of stuff?  Most of the large park area that should be Gallions Reach Park is still closed by high fencing. Has been like this for several years. It was suggested this was because the authorities are still dreaming of a 6-lane road bridge and associated feeder roads at this spot (remember the proposed East London Crossing and the Save Oxley Woods campaign?).  Back on the Thames path headed to Woolwich Arsenal and a longish break at the Cornerstone Cafe.  35 riders turning up was coped with well.  From Woolwich continued on the outward route until the Ecology Park.  From there cut across the peninsula including the bridge over the Blackwall Tunnel approach.  Passing the Meantime brewery noted a group of cyclists sampling the local brews.  Continued to the Thames path close to Greenwich and back at the Cutty Sark at 12.40, 20 minutes early.  As Roxy messaged "an awesome ride" blessed by fabulous weather.  Special thanks to Amanda for leading. Route tracks below.  Note we were unable to do the extensive north of the river stretch - will do that another day. 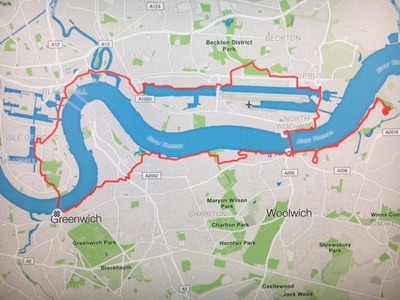 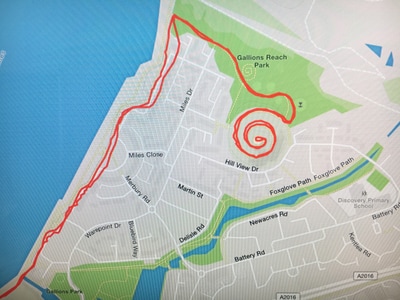 Vauxhall Bridge
June 3rd, 10am to 12 noon.
Dulwich to the Thames.
A fine group of 20 riders gathered in Dulwich Park Cafe on a sunny day, just right for the first Summer ride.  We were off on a route that we did last year (see report), devised to demonstrate that you could do a non-hilly ride from Dulwich. Route follows the the “lost” river Effra to the Thames. First stop a look at the lake on Dulwich Park itself, a lake formed by damming a tributary. Then to Brockwell Park where the Effra, now underground, slips between the hills of the park and Denmark Hill.  Next to Brixton town centre where traffic was very heavy, so we turned down Acre Lane and ciut through Trinity Gardens and Bernays Grove to avoid the worst of it.  Down Brixton Road and round the Oval, then picking up the short CS5 to Vauxhall Bridge. I had promised a view of the Effra running into the Thames, but as David gleefully pointed out, I should have checked the tides.  At near high tide the arched exit was just visible, but any inflow was invisible under several metres of Thames water! Return ride was back round the Oval now thronging with cricket supporters heading for the Champions Trophy match between South Africa and Sri Lanka.  Next through Kennington Park and on to Myatts Fields and Elam Open Space.  Then back to Dulwich Park pretty much dead on 12 noon.   There really are no significant hills on this ride.  Starts at 131ft and descends to 16 ft above sea level.  With all the small bumps there is a total of 245ft of ascent, all low slope stuff.  Route at http://tinyurl.com/y7ul6r9r or GPX below.