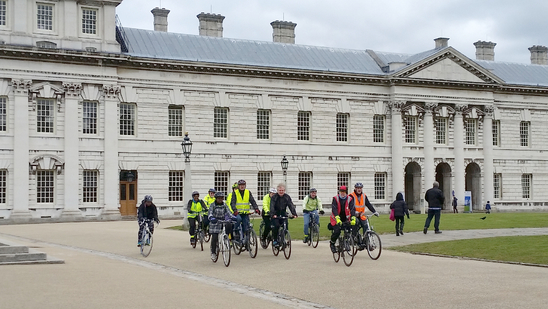 Healthy Ride Report 19th March 2016
“+” Ride from Canada Water to Thames Flood Barrier
A grey, cold but dry morning saw 12 riders set off from Canada Water a bit after 9.30.  Ride Leader Werner had devised a new inland route for the outward leg.  This passed via Greenland Dock, Surrey Canal Road, the Deptford cycle paths and through Greenwich Park.  Everyone puffed up the long hill (The Avenue) then across to Vanburgh Hill where we went back down to sea level.   Then a complicated back street route to the high pedestrian/cycle bridge over the wide Blackwall Tunnel Approach.  From there on the nice North Greenwich cycle paths to the Thames Path beside the Greenwich Yacht Club.  Access here has changed with the new building but is if anything improved.  Finally a short ride along the Thames Path (Nat Cycle Route 1) to the Barrier, where everyone dived into the café to warm up.
After a longish break we remounted and headed back along the Thames Path all the way to Greenland Dock, then inland to Canada Water.  Back exactly on 1pm – terrific timekeeping.  And the temperature had warmed up nicely.  Hi res photos (from Philippa) at https://www.flickr.com/photos/87825147@N04/shares/4J5EK4  (at least I hope they are; if this link does not work email b.lynn@ucl.ac.uk and let me know).  Total ride was 25km and map from Werner’s mapping app is at: http://taffimai.w2.org.uk/healthy-rides/CW-ThamesBarrier-20160319.html
Healthy Ride Report, March 12th 2016
Canada Water-Blackheath Loop
15 riders at Canada Water on a chilly morning – but dry.  Headed to Blackheath via 2 zig-zag bridges over railways (Oldfield Grove and Elverson Rd).  Merton Hill was the usual challenge but we all puffed our way up it.  Short stop in Greenwich Park then down to the Thames at the new bridge over Deptford Creek.  Back safe at Canada Water just before 12 noon. 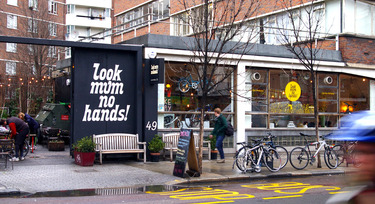 Healthy Ride Report.  Feb 27th, 2016
Peckham to Look Mum No Hands in Old St
A cold February morning, but this did not stop 18 riders meeting up at Peckham Square for the latest Healthy Ride.  Headed north led by Amanda, who provided much of the information for this report.  Canal Path, Burgess Park and Walworth Green Link to the New Kent Rd. One more rider joined there, so a group of 19 riders continued towards Southwark Bridge.  Joined the Quietway 1 route at Trinity St.  Q1 road markings have started to appear and also a smart direction sign in Trinity Square (see photo beow and http://southwarkcyclists.org.uk/quietway-1-new-signs-appearing/). From Southwark Bridge continued north through the City, past the Guildhall and round the east side of the Barbican.  Had a well-earned stop at Look Mum No Hands, the original cycle workshop/café/bar in London.   Many escaped the cold for a coffee.  Some were loth to stop chatting and leave, so return started a bit late!  Fortunately had a quick ride back to Peckham, ending up at 12.15. 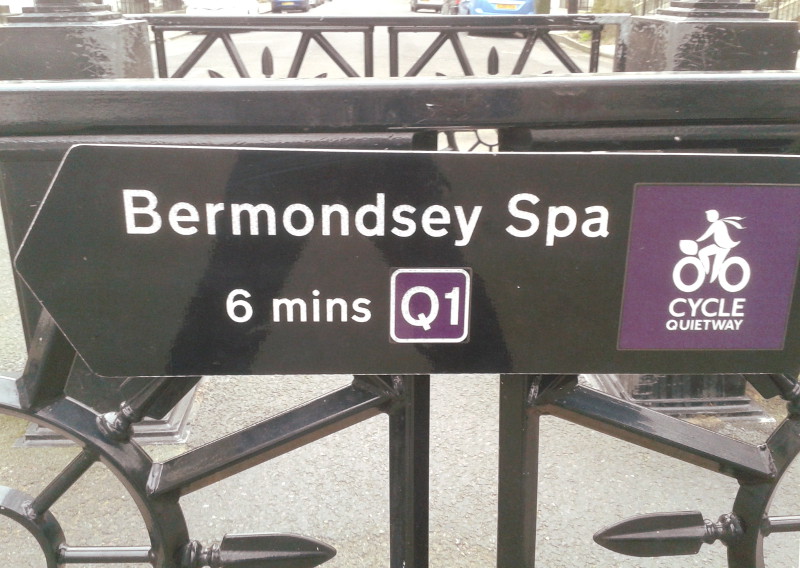 Quietway 1 sign in Trinity Square
Healthy Ride Report.  Feb 20th, 2016
16 riders at Canada Water for a “+” ride on a dull February morning.  Two more joined en route, so a group of 18 riders wound their way across the City and the West End following an ambitious route through or past 4 of the Royal Parks.  Route out was across Tower Bridge and up to Aldgate, which was a little tricky due to road works.  Then west to Smithfields, northwest to Bloomsbury and finally west to Regents Park.  Good time made, so a longish coffee break was possible at the cafe located at the intersection of Chester Rd and The Broad Walk.  From Regents Park south, across Oxford St at Debenhams, then Grosvenor St to Hyde Park.  Through park to Hyde Park corner, down past Buck House, round Horse Guards and though to the Embankment at Westminster Bridge.  Awkward to get on to the new 2-way cycle track on the river side of the road, but worth it.  Nice newly surfaced, almost empty, cycle lane all the way to Blackfriars.  Across Blackfriars Bridge and usual Nat Route 4 back to Canada Water.  16 miles and finishing pretty much on time.  Route at https://goo.gl/PBJ73a 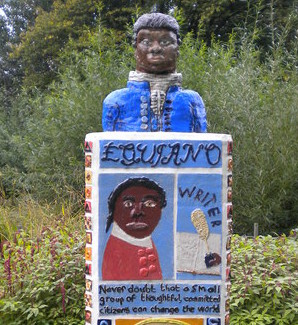 Carved post in Telegraph Hill Park marking 200 years from ending of slavery.
Healthy Ride Report, Feb 13th 2016.
Canada Water to Telegraph Hill Loop.  16 riders on a cold, damp, February morning – most impressive (Meteorological note – Feb 13th is on average the coldest day of the year, and it felt like it.)
Out via Peckham Square and past Nunhead Cemetery.  Did not stop long at Telegraph Hill, as chilly and a bit behind time.  But you could just about make out the Central London skyline through the smirr.  Steep up and down through the lower part of Telegraph Hill where we stopped briefly at the carved pillar put up in 2007 to celebrate 200 years from the ending of slavery.  Then steep downhill to New Cross – everyone’s brakes help up. Through back streets to Bridgehouse Meadows.  Then across Surrey Canal Road onto the path to Surrey Quays.  The planned new cycle path for Quietway 1 from the Connect 2 bridge is now clearly visible along the railway embankment and should open by the summer.  Back at Canada Water on time and, despite the weather, everyone seemed remarkably cheerful!  8.3 miles; route map at https://goo.gl/pgJVhV
Healthy Ride Report – Jan 23rd 2016. Loop to Brixton Mill
11 riders at Peckham Square on what turned out to be a beautiful winter morning.  Cold, but lots of sunshine and little wind.  Set off on the Brixton Windmill loop, a route used several times over the last few years.  Out via Burgess Park and Myatts Field, back via Brockwell and Ruskin Parks.  Nice stop at the mill which was not open, but will be at Easter.  Joanna told us wheat had been planted in Ruskin Park for milling in Brixton in the Autumn (see http://www.brixtonwindmill.org/friends-blog?item=243).  So an extra stop at Ruskin park where we found the wheat in a plot at the top of the hill towards the south side of the park.  Looked to be growing well.  Route at http://goo.gl/maps/ETBfk
Healthy Ride Report, 16th Jan 2016.  Canada Water to Battersea and back.
Plus ride to Battersea Park.  A bit after 9.30 sixteen riders set out on a cold, bright morning.  Along the river to Tower Bridge. Crossed to the north bank where we tried to cycle along the cobbles in front of the Tower of London.  A very polite official asked us to walk, so we did.  Beside All Hallows Church, crossed on to the new East-West Cycle Superhighway. This section is open as far as the Monument.  Then a horrid road section with heavy traffic.  Did a 2-stage right turn into Queen St and continued up to Queen Victoria St, which had almost no traffic.  At Blackfriars Bridge were lucky with a gap in the traffic to make the tricky right turn on  to the Victoria Embankment where we rejoined the next completed section of the East-West CSH.  It is very relaxing leading a group along a wide segregated track.  At Westminster Bridge normal service was resumed and we fought through traffic to Gt College St. Then via quiet streets parallel to the Embankment to Chelsea Bridge, which we crossed to get to Battersea Park.  Longish coffee break at the Gondola Cafe to warm up cold hands and consume delightful Italian pastries.
Return started by exiting at Queens Circus.  This is now signalised and has a cycle track all round.  Worked nicely to get us to Nine Elms Rd.  Eventually to Thames path approaching Vauxhall.  Went under the bridge then lugged bikes up the short steps to the new cycle path.  This is part of CS5 which we followed to the Oval.  Then through Kennington Park, Burgess Park and Southwark Park and back to Canada Water at 12.45.  Hands less cold at the finish as the temperature had risen slightly.  Found the stretches of new segregated cycle track really nice.  I think these will make quite a difference to cycling levels, especially as more gets finished so a decent network starts to emerge.
Annotated route at https://goo.gl/9wIETO.  Route also at http://www.bikely.com/maps/bike-path/canada-water-to-battersea-park-loop 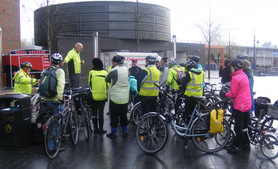 Briefing before start at Canada Water. Photo by Nigel.
Healthy Ride Report, 9 Jan 2016
21 riders at Canada Water for the first ride of 2016, even with an iffy forecast.  Full report at http://southwarkcyclists.org.uk/healthy-ride-canada-water-to-camberwell-loop-taking-in-some-of-the-new-cycling-routes-and-infrastructure/