Sept 30th 2017 . Canada Water to Battersea Park and back
Dry and mild as 17 of us set off from Canada Water led by Philippa.  Started on the Thames route (NR4) up to Blackfriars to get onto the cycle superhighway then onto CS3 along Embankment. Unhappily not without incident, unfortunate kerb clip took David, our backmarker, down at Backfriars.  Then a tourist tripped off the kerb into Philippa's front wheel and knocking her over.  Fortunately no-one hurt, but David’s front mudguard was history.  Back onto NR4 to Battersea then looped around into new plaza by Battersea power station. Enjoyed a view of the development work.  The new area opened up is fascinating with some new shops and bars already open.  Finish in the new public spaces is to a high standard.  Signs said the Clipper will start to call this autumn, but the pier not installed yet….  A group photo then into the park via a section of path cantilevered under the road bridge. Cafe stop in the park before returning via Nine Elms (lots of roadworks preventing access to Thames pathway) to the South Bank and back via part Q1 then route LCN22 and through Southwark Park.  Route at https://goo.gl/eNvKSi 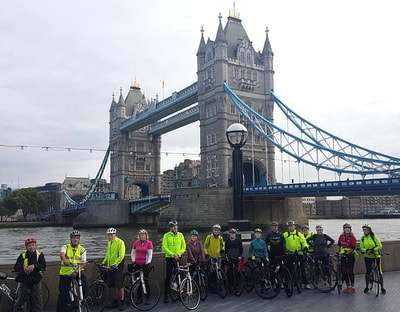 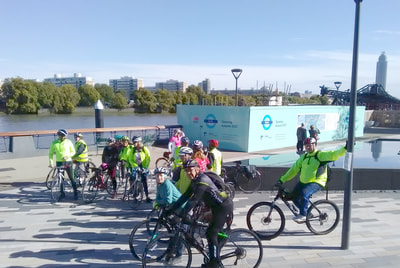 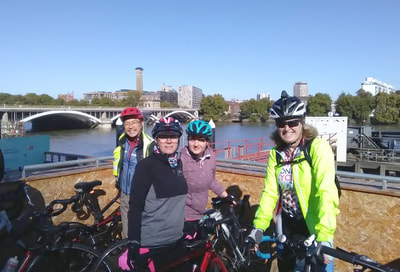 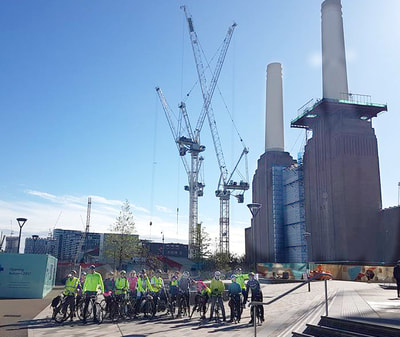 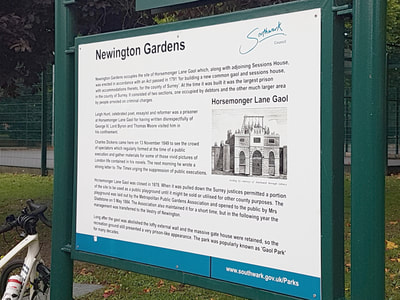 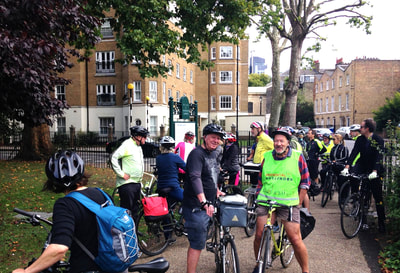 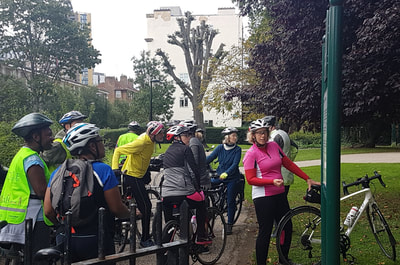 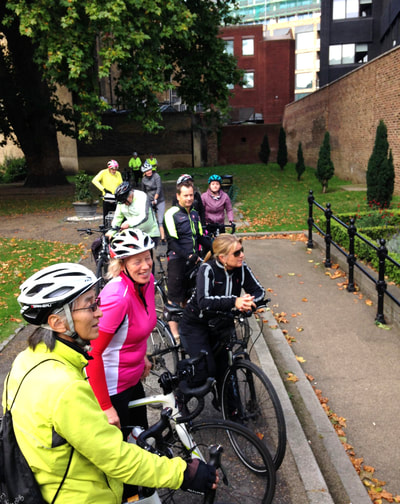 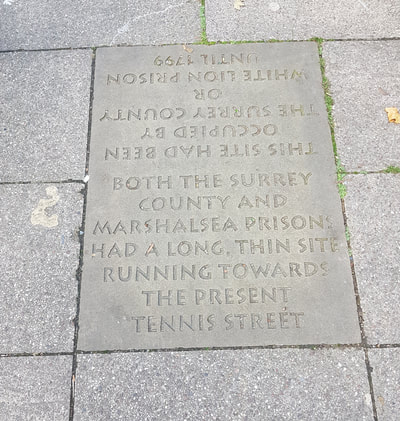 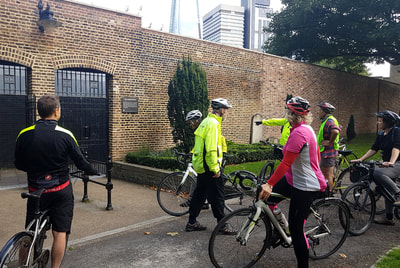 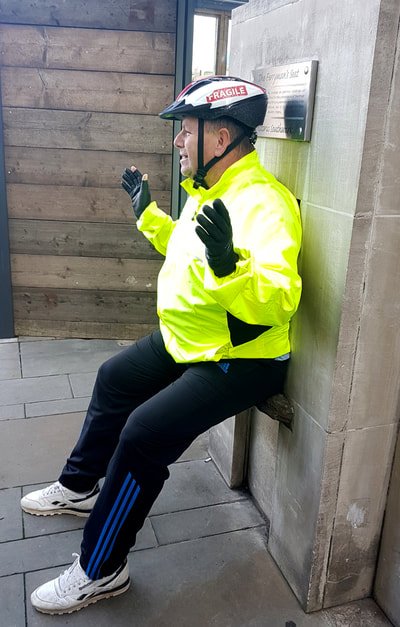 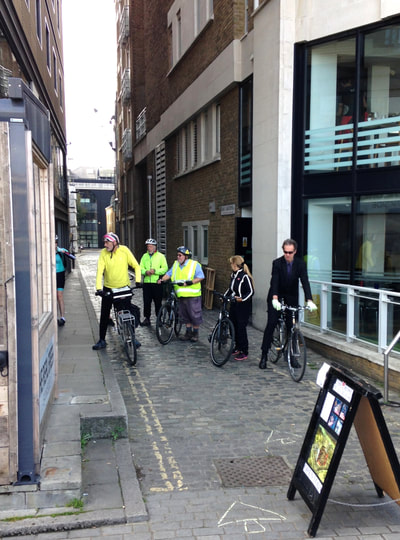 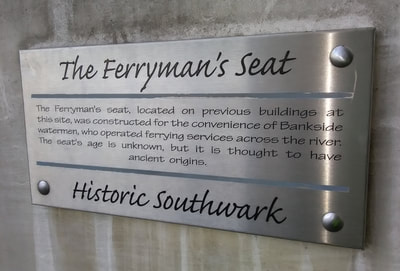 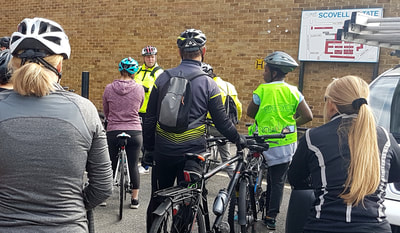 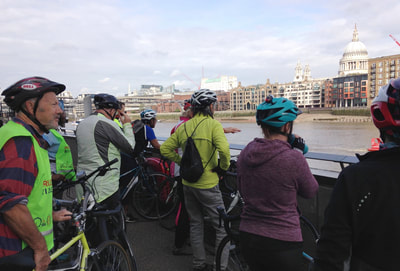 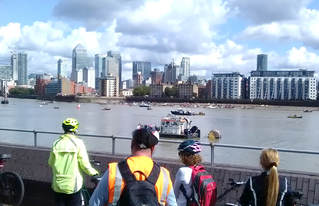 Looking across to Millwall riverside where boats for Gt River Race were waiting to start.
Canada Water-Lewisham Loop  Sept 9th 2017
Continuing our National Route 21 theme from the last 2 rides, this ride headed for the north-most section. 17 riders, including 2 very young ones, headed off from Canada Water, and another 3 riders were collected en route.  Reasonable weather with some sun about.  Headed across Southwark Park, then over to Deptford Park and Folkstone Gardens.  From there the Deptford paths, across the A2 and on to Brookmill Park.  Picked up National Route 21 and headed South past the Lewisham Leisure Centre to the end of the off road section at Elmira St.  Next back to the Lewisham Leisure Centre for a short break. Then continued down NR21, through Brookmill Park again and continuing to the Thames at Deptford Creek.  Finally Thames path and Greenland Dock back to Canada Water.  Stopped on the Deptford riverside to watch preparations for the Great River Race.  Lots of small boats getting ready to race up with the incoming tide to Ham house in Richmond. Route at https://goo.gl/w4LBUR or gpx below. 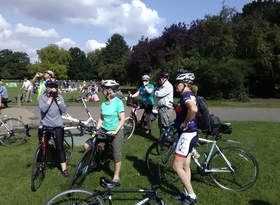 Back in Dulwich Park at end of ride
Dulwich to Lower Sydenham and NR21.  Sept 2nd, 2017
28 riders at the Pavilion Cafe, Dulwich Park on a lovely sunny morning.  This is the best turnout ever for a Dulwich ride.  The aim was to get to Cator Park. However a broken chain caused a long delay so it was decided to head straight to Lower Sydenham from Sydenham Station.  This meant we had plenty of time to enjoy the nice stretch of the Waterlink Way (NR21) nearly to Catford.  Had already decided not to return via Forest Hill, as planned.  Lengthy perusal of contour maps had revealed that the climb from Honor Oak was easier, and this also avoided the steps at Forest Hill Station and the "kerbed off" right turn into Wood Vale south end.
In the end were back 10 minutes early with several riders happily settling down for a drink and refreshment in Dulwich Park.  Route, with all the variations, at ﻿https://goo.gl/SdXbx8.  Also attached below as gpx file.﻿

Download File
Rotherhithe to Regents Park + Ride,  August 19th 2017
27 riders at Canada Water including our youngest ever actually peddling on a bike.  Her bike was hooked to her Dad's with the front wheel off the ground, but the back wheel riding the road.  And this very young person was really peddling!  Was interested to see if this long double bike would get though the triple barrier at the Gomm St entrance to Southwark Park.  It did, with some assistance from a helpful pedestrian.  But I still think this barrier should go - no-one has justified its sudden appearance a year or so back without any consultation.  In fact, why not open the large gates into the park a  provide a welcoming entrance for all users.  There is a traffic barrier just inside the gate, so keeping the gates closed serves no function except to discourage people from entering.
Took an quiet inland route to Waterloo Bridge, then across the bridge to Covent Garden and Leicester Square,  Lots of tourists and other pedestrians, but really light motor traffic.  Presumably this was because many of the locals are on holiday elsewhere.  Continued through China Town and up Wardour Street, then past the Post Office Tower and into Regents Park.  Arrived at our cafe break on Chester Road at 10.45, so could have a nice 25 min break.
Started back at 11.15 minus our youngest rider.  Her family decided to stop longer in the Park then make there own way back.  Our return route again took us across Bloomsbury, past the PO Tower and then the British Museum.  Then one  of Werner's improbable routes through back alleys in the Temple, ending up miraculously on the E-W Cycle Superhighway.  From there back by the obvious route over London Bridge along Thameside route (NR4).  In such good time we could make a small detour past Surrey Water and to Stave Hill.  Back at Canada Water at 12.55.   GPX file of route below. 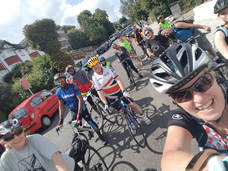 Parks and Commons.  Dulwich Ride, 5 August 2017
Report from ride leader Phillipa.
"16 of us set off from Dulwich Park on a nice cycling day, warm but not too hot. We headed off first of all to Brockwell Park, low traffic levels made entering the park easy. Round the park then off on LCN 25 to Clapham Common. We crossed the common and exited via traffic lights onto Nightingale Road then used quiet roads to reach Wandsworth Common. Then on to Tooting Bec via Balham. Across the common and under the railway line to weave around Streatham then back via Dulwich College and the cycle path into Dulwich Park. Perfect size group meant we had no problems with lights/traffic and everyone enjoyed the route.
No David but Harry was there and did a good job as rear guard."
Check out the route on Strava: https://www.strava.com/activities/1118357956/shareable_images/map_based?hl=en-US&v=1501942248