Healthy Ride Report - Sept 19th 2015
11 Riders at Canada Water Library in pretty good September weather for a ride led by David to the Thames Flood Barrier and back.  Uneventful ride with a nice long coffee stop at the Barrier Cafe. Route for this ride is easy, following Nat Route 4 which in turn is mostly also the Thames Path.  So pretty much all off road and some very nice cycle path in places, for example the stretch past the O2. Route on Google maps at: http://goo.gl/KbVwAl
Healthy Ride Report - Sept 12th, 2015
Surrey Quays to Burgess Park Loop. Good turn out of 13 riders, despite poor forecast.  In fact apart from a brief shower just before we started, it was a dry, and eventually sunny, morning. Out via Thames path and Bermondsey Spa Gardens and back using the Connect 2 route (NR425) as planned.  Group made good time, so were able to have a look at the BMX track in Burgess Park.  This was busy with sessions for young riders.  Had a look at the work on the new path linking Connect 2 bridge at South Bermondsey station to Surrey Canal Road.  Large hoardings made it hard to see how much work has been done.  But it is clear that work is underway on this important link.  Route at http://goo.gl/maps/W5ArW.
Healthy Ride Report - Sept 5th, 2015
Dulwich to Waterlink Way. Just 6 riders at the Pavilion Cafe, Dulwich Park.  The cool temperature and the steady rain perhaps having an effect.  Headed off up Fireman's Alley (detouring slightly as usual exit gate was locked) with the rain easing, then stopping.  Made good time on the climb up to the Horniman Museum, then a run down to Forest Hill station.  We used the underpass to avoid the busy roads and headed, mostly still downhill, to Bell Green via Mayou Park. Next a pleasant run along the Waterink Way (NR21) to Catford Bridge.  Here the new development is largely complete with access to the "correct" (2nd) railway arch re-opened.  Unfortunately the builders have omitted to provide a dropped kerb for cyclists and wheelchairs.  A message to Lewisham Council will have to be sent.
From Catford up to Camberwell New Cemetery using the LCN22 route, i.e. missing out Blythe Hill park.  A bit of a cop-out, but this route does have a lot of climbing!  Through Camberwell New Cemetery and on to Camberwell Old Cemetery. We were in good time so did do the climb up to Dawsons Hill and were rewarded by really clear views to the north from Canary Wharf to Battersea Power Station.  Wembley Stadium was clearly visible. Had time for a brief diversion to Herne Hill Velodrome which 2 of the riders had never visited.  Back at the Pavilion Cafe at Noon in much better weather than when we started.
Route at https://goo.gl/U6zWbW
Healthy Ride Report - August 22nd 2015
12 riders set out from Peckham Square.  Bruce Leading,  Malcolm taking the rear.  Made it to Blackheath and back as planned.  Weather fabulous.  Out leg a bit hilly….  Back on time despite one puncture close to home.  Route at goo.gl/y1gVQg 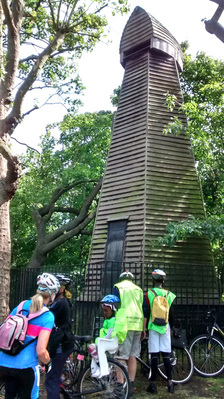 Wandsworth Mill (Photo from Celia)
Healthy Ride Report – August 15th 2015
A “+” ride, so 9.30 start.  12 riders at Burgess Park surrounded by the stands preparing for the Elephant and Nun Festival.  Dry morning with the promise of sunshine later.  Ride title was Commons, Parks and Windmills and the first stop was at Brixton Mill, reached via Myatts Fields.  Then on to Clapham Common – Windmill Drive but alas no windmill – only the road name and the pub to remind us.  From Clapham common a short run to Wandsworth Common and a coffee stop at the excellent Skylark Café.  By now the sunshine had arrived and riders were shedding layers. A short run south from the Café took us to Wandsworth Mill.  Only the tower remains and this is surrounded by trees.  But recognisably a windmill.
From Wandsworth Common took a fairly direct route to the north edge of Tooting Bec Common.  Did not attempt the route through Tooting Commons due to worry about time.  Finally rode back via Brockwell and Ruskin Parks.  Arrived at Burgess Park Café at 12.50 having covered about 16 miles.  Route at  https://goo.gl/IIIBUF
Healthy Ride Report – August 8th 2015
12 riders at Canada Water on a dry day.  David leading for his usual route: east to Greenwich, through the foot tunnel, round the west side of the Isle of Dogs and through Wapping. Back over Tower Bridge and along the south side of the river.  Werner helped with the back marking.  Niger commented: "a strong showing from the north of England."  Not sure what he meant...